Here’s where to find out more about my novel Asphodel.

Asphodel was a delight to write, but admittedly it’s different from anything I’ve done before. 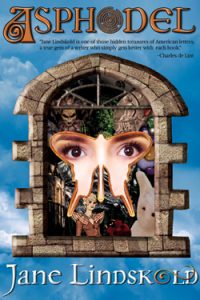 Below you can find a spoiler-free blurb; a link to a post I wrote about how Asphodel came to be written; a review that contains some spoilers;  a link to a sound clip of the author (that’s me) reading the first eleven minutes of the novel; a short piece about the cover art.

Eventually, I hope to include fan art and other Asphodel-related material.

Nameless in a doorless tower graced with seven windows, she is imprisoned.  Who is her jailer?  What is her crime?

After she discovers the secret of the seven windows, the nameless one, accompanied by two impossible companions, sets forth on fantastical journeys of exploration.  But, for the nameless one, learning her name may not be a welcome revelation, and the identity of her jailer will rock the foundations of a tower that has come to be as much refuge as prison.

Here’s a list of places where you can find Asphodel!

Want to Know About How Asphodel Came to Be Written?

Here’s a link to a blog post I wrote when Asphodel was released.  The stuff you want is right after the cover blurb.

Publisher’s Weekly Review (with some spoilers)

(BookLife is a division of Publisher’s Weekly)

Longtime fantasist Lindskold’s beguiling puzzle throws an inventive, amnesiac heroine into a magical world with undercurrents of forgotten trauma. An unnamed narrator awakens in a tower without any sense of her identity. Seven windows looking out on a distinct landscapes provide her only entertainment. She crafts companions by tying a pillow into the shape of a rabbit and drawing a sensible, living paper doll named Muriel. With these two friends, she projects herself in disguise into the scenes outside the tower. The trio stops thieves in an urban setting, hunts for a unicorn, rides giant seahorses, and engages in a dangerous battle with nightmarish, winged cherub heads. The narrator’s lack of hunger, thirst, and fatigue allows for endless exploration and the slow discovery of the rules of her powers. The companions’ excursions increase in daring until a visit to an Egypt full of gods and magic sparks the narrator’s desire to recollect her own identity. Searching for her past, however, exposes the bleak truth of her existence in the tower. This curious blend of fanciful vignettes, real danger, and existential mystery wends a twisting, pleasurable way through the powers of imagination. (BookLife)

Another Review With Some Spoilers

There are several ways to review a novel. Probably the worst of all possible ways is simply to list the events that happen in the story. It’s a ridiculous approach because that’s exactly what the story itself does, and generally it will do the job much better than the reviewer will ever be able to manage. Another approach is to try and put the story in context by comparing it, either explicitly or implicitly, to similar stories written by other authors, and to comment on the success or failure of scene setting and character development as the story progresses. I much prefer this second approach, but Asphodel by Jane Lindskold is such a strange novel that it simply isn’t possible.

The narrator awakes all alone in a comfortable bed which is in a slightly misshapen octagonal room. She doesn’t know where she is or how she got there. Windows in the room look out on several different scenes both domestic and fantastic – one window, for example, shows two people doing the washing up, while another displays a unicorn.

The narrator feels the need for a companion and it isn’t long before Muriel joins her. Muriel’s arrival and her logically consistent but nevertheless inexplicable abilities are the first real indications that absolutely nothing in this story is going to go the way the reader expects it to go.

Muriel and our narrator set out to explore the worlds in the windows. One of these is full of rabbits. At Muriel’s suggestion, our narrator uses unconventional means to acquire a rabbit-like companion called Puck to help with the exploration. The name is well chosen, for he will be very puckish throughout the story…

Character and situation are now defined, and the story that follows has all the disconnected logic of a dream, or of a drug trip. It makes perfect sense within its own wild parameters, but those parameters have little or no connection with mainstream storytelling, or even with mainstream fantasy, as most of us would understand the term. Nevertheless the story remains simultaneously both real and fantastic – the reality is sharply focused and the events are crisply described even though, of necessity, they take place within the strangeness of a completely fantastic (in the literal sense) and surreal (in the juxtapositional sense) framework. Everything is as sharp as a pin. The searchlight of the story leaves no shadows in the corners.

The only way I can even begin to describe how the story all hangs together is to liken it to a picture by René Magritte that has been extended into an action packed movie. Magritte’s paintings are their own justification. They stand alone, making sense only on their own terms. Every element they contain seems perfectly normal when considered in isolation. It’s only when you put them all together in one place that the strangeness shines through.  But of course, that doesn’t matter at all in terms of appreciating and enjoying their twisted nature. Perhaps Asphodel is the book that Magritte would have written had he been a novelist rather than a painter.

Asphodel tells a very odd, and oddly compelling, story. It’s completely impossible to categorise and even harder to describe without spoilers. I’ve read it twice now and I still don’t really know what I’ve read. But I do know that it was very well worth the reading.

Here’s a link to an audio clip of the beginning of the story.

Behind the Cover Art

The art is by Rowan Derrick, who also created the cover art for my short story collection, Curiosities.  One of the special things about this art is that Rowan was a member of a small group to whom I read the entire manuscript over a number of weeks. 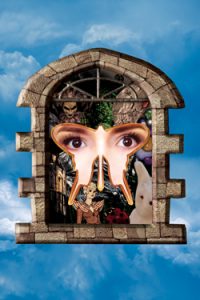 Many times, a cover artist’s only awareness of the novel is what the publisher’s art director tells her to draw or paint.  Sometimes cover artists are given a couple of descriptive paragraphs to read.  Rarely do they have the chance to immerse themselves in the story in advance. 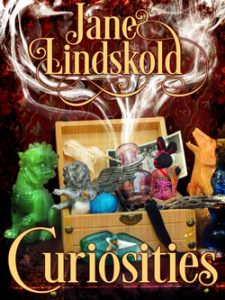 So when I said to Rowan: “I want a cover illustration that is surreal while simultaneously being firmly grounded in images from the novel,” she was in a position to attempt this almost impossible task.  The end result is a cover that, while being a beautiful illustration, will – as one of my beta readers said – provide readers with the pleasure of going “Oh!  I see where that fits in now!”