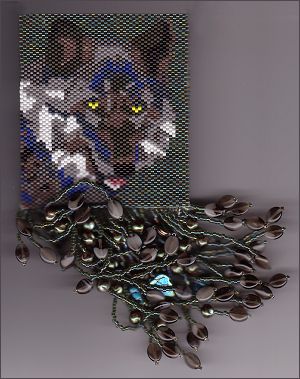 What are you working on now?

With Library of the Sapphire Wind and Aurora Borealis Bridge both out, I’m waiting on editor’s notes for the sequel, House of Rough Diamonds, which is scheduled for October of 2023.

A New Clan, Star Kingdom Book Four, with David Weber is out and we’re writing SK5.

What will you be doing next?

I have a few short story projects I’d like to squeeze in, and I’ll probably do something new in the “Over Where” setting.

I’m also continuing to be part of the new incarnation of DreamForge magazine team, DreamForge Anvil, which is more focused on the craft of writing.

For more frequent updates, check out my Wednesday Wanderings blog each week.

I notice that your first several books are stand-alones, but lately you seem to be writing novels, and even short stories, that fit into series. What is the attraction of writing series?

My first several books were indeed stand-alone novels. At the point when I wrote them, it was challenge enough to write a good, complete novel without contemplating the challenge of writing a series.

Eventually, however, I became attracted to the idea of setting more than one novel in a universe or returning to a set of characters. Both world and character building are intensive projects. As one grows more skilled at these, the more potential stories involving the places and people you are creating suggest themselves.

The only problem for a fantasy writer (something that doesn’t seem to happen if you’re writing SF or mystery) is that people automatically assume you’re writing a trilogy, and that the whole story won’t be finished until you’re done with the third book. I don’t work like that. Each book contains its own story arc — that’s why both the athanor and the Firekeeper books are so long — and that story arc will be completed by the final page of that novel. I reserve the right, however, not to wrap up my characters’ personal lives. The complexities of real lives don’t get neatly resolved in six weeks or six months. Why should they in a novel?

Do you ever plan to write sequels to any of your current stand-alone novels?

I have no definite plans at this time, but if the right idea occurred to me I would feel free to return to those characters and settings again. The one thing I won’t do is force a sequel. An idea would need to be very compelling for me to risk tinkering with places and people that have already worked well.

Do you have any favorite novel among those you’ve written?

No. Each novel did something I wanted to do at that time. Needless to say, I’m excited about my current projects. I wouldn’t be doing them otherwise, but I won’t disown my other books.

I do have a least favorite cover, though. Somewhere between art department and artist, Marks of Our Brothers picked up a cover that looks really sappy. The execution is sharp, but for a novel about first contact with aliens, xenocide, interstellar intrigue, and vendetta murder, it’s a really sentimental cover. Girl with gentle aliens or beasties. Yuck! Sigh. As one reviewer put it, early in my career I was cursed with “fluffy bunny” cover art. Just to assure those readers who aren’t sure, I don’t write “fluffy bunny” books.

You mean you don’t get to pick your cover art?

Nope. Even the big shots rarely get more than cover refusal. That means they can turn down a cover, but they can’t dictate what is going to be on it.

However, when I do something on my own, like Wanderings on Writing or Curiosities or the new Firekeeper novels, Wolf’s Search and Wolf’s Soul, or the surreal novel, Asphodel, then I do have input on the cover.  The same goes for reprints of my backlist books.

Will there be more athanor books?

I do intend to write more about the athanor. Right now that writing is going to most likely take the form of short stories, but I do not have any immediate plans to do any more novels. Part of this is due to publishing constraints, part due to my own current commitments. Be assured that whenever the athanor reappear, in whatever form, the information will be posted on this site — and thanks for your continued interest.

In fact, I’ve done one such short story already. It’s called “Witches’ Broom, Apple Soon.” It will be in the anthology Faerie Fantastic, edited by Russell Davis and Martin H. Greenberg.

Why do you write science fiction and fantasy?

I enjoy it. It’s what I read for pleasure — with mysteries and history coming in a close second. (And I’ve written some of that too). I like the freedom to create a place in which I can investigate whatever issue interests me at a given time. I like the challenge of building believable societies and characters. It’s the closest to creating myths and legends — the road that led me to SF and fantasy a long time ago — that I’ll ever have.

What do you do when you’re not writing?

Well, I read a great deal. I also do craft work, especially bead work — thus explaining why there’s a beaded wolf pouch on this page — and modeling in polymer clay.

When the weather permits, my husband and I garden. Gardening in New Mexico is a challenge for a transplanted Easterner like myself (and for my husband, an archeologist who’s more accustomed to digging up dead things than planting live things), but if the number of ribbons we won at the 2000 NM State Fair is any indication, we’re doing something right.

What advice do you have for someone who wants to write?

Write. Keep writing. Read. Read everything you can lay your hands on, including stuff that you’re not sure you’ll like. It stretches your mind, imagination, and skills. After you’ve written something you think is pretty good, you can follow one of two paths. You can find a writer’s group and get other writers to critique your work. Look for people who understand the genre (mystery or fantasy or science fiction) you want to write or you may find yourself needlessly explaining the basics like warp drive or locked rooms.

At this point I must be honest. I don’t workshop my stuff — though I do have friends who read completed works — but workshopping is a proven technique that has been useful for many writers. Workshopping can also help you find the enthusiasm to keep writing when the realities of the business get to be too much.

If you don’t want to workshop your stuff or can’t find or form a writer’s group, then send out what you’ve written. You can learn how to do this in many places. Ask your local librarian or check writing magazines. Some websites include more detailed information about this process.

Be prepared for rejection. It happens all the time. The number one virtue (virtue not skill) that a writer needs is persistence.