Home The Universe of “Artemis Awakening”

The Universe of “Artemis Awakening”

Want to know more about how I came up with the title – and about how fan input influenced the title of the forthcoming Artemis Invaded?

Titles in the “Artemis Awakening” series 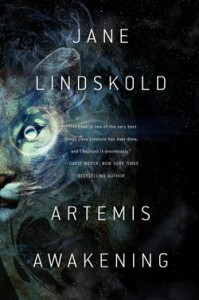 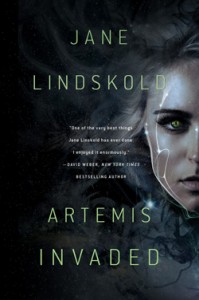 A Bit About Book One: Artemis Awakening

When the Empire fell, the location of the planet Artemis was lost, although legends remained to tantalize historians.  When ambitious archeologist Griffin Dane finds intriguing hints as to the location of the lost planet, he sets out alone to confirm his find.  When Dane reaches Artemis, his shuttle crashes – perhaps not by accident.  Stranded, with no discernible way to get home, he forms an uneasy alliance with the Huntress Adara and her psych-linked companion, the puma Sand Shadow.  Together they set out to find a way to get Griffin home, along the way uncovering some of the secrets that lie beneath the planet’s wilderness exterior, secrets that may lead to the recovery of weird powers far beyond what humanity now dares to dream.

Still shaken by the events that ended with the Old One’s Sanctum off-limits for the foreseeable future, Griffin, Adara, Terrell, and the puma Sand Shadow set out for the forbidden zone of Maiden’s Tear.  There they hope to find another repository of the seegnur’s technology and, with that, the means by which Griffin can contact his orbiting ship.

But although his Sanctum may be drowned, the Old One has not given up his dreams of being the one who will resurrect – and control – the seegnur’s technology.  Along with Adara’s former lover, Julyan, and the mysterious child-psychic, Seamus, the Old One stalks Griffin, Adara, and Terrell, intent that any prize they take will become his own.

In the midst of this, Adara wrestles with her complex feelings for Griffin and Terrell – and with the consequences of her and Sand Shadow’s new bond with the planet Artemis.    Focused on his own goals, Griffin is unaware that his arrival on Artemis has created unexpected consequences for those he is coming to hold dear.  Unwittingly, he has left a trail – and Artemis is about to be invaded.

Quiz: What Would You Be If You’d Been Born on Artemis?

When the seegnur created Artemis, they ordained exclusive Professions for those who would serve them most closely.  Take this quiz to learn what your profession would be.  As a bonus, a couple of the professions included haven’t yet been mentioned in the stories!

Both Artemis Awakening and Artemis Invaded have been recorded as audiobooks.  The reader is Joe Barrett.  Joe’s official bio says:

“Joe is a seven-time Audie Award finalist whose narration of Reed Farrel Coleman’s Gun Church won the 2013 Audie Award for Original Work. AudioFile Magazine has granted Joe thirteen Earphones Awards, most recently for James Salter’s All That Is. AudioFile said of Joe’s narration of John Irving’s A Prayer For Owen Meany: “This moving book comes across like a concerto … with a soloist – Owen’s voice – rising from the background of an orchestral narration.” Joe has performed both on and off-Broadway and in regional theaters from Los Angeles to Houston to St. Louis to Washington, D.C. to San Francisco to Portland, Maine. He has appeared in films and television and in hundreds of television and radio commercials. Joe is married to actor Andrea Wright. They have four very grown children.”

Want to listen to a sample?

Oh!  And if you’re curious about what it’s like to work with an audiobook reader and some of the weird things that come up, I talk about it here.

From its earliest days, “Artemis Awakening” has stimulated artists to grab the tools of their choice.  In fact, a fan’s art contributed to the cover design.  Want to know how? 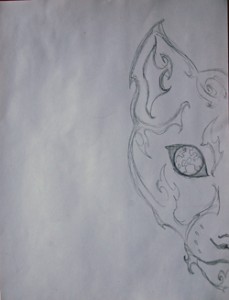 Fan Art isn’t always visual.  Chad Merkley was inspired to expand the lyrics to Adara’s “My Love is Like a Panther Swift.”  You can download the song.

Tori Hansen took a whimsical look at Sand Shadow at the beach. 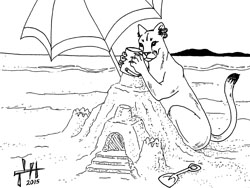 Cale Mim’s was inspired by Terrell’s battle with the spider to provide this dramatic image: 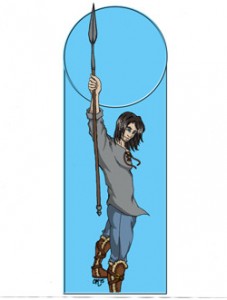 I can’t draw to save my life, but with help from Tori Hansen, I adapted a puma toy into a Sand Shadow to keep me company on the road. 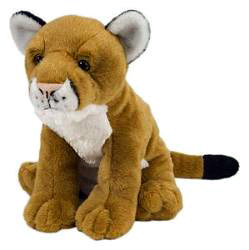 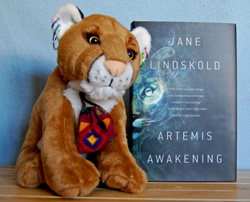 Want a Second Opinion about the “Artemis Awakening” series?

Obviously, I’m enthusiastic about the universe of Artemis Awakening or I wouldn’t be writing the story.  However, here’s what a few other people have had to say:

“…fallen civilizations, mad scientists, telepathic animals, and enigmatic mechanisms bordering on the mystical, all filtered through a modern sensibility and polished prose.  Embracing and building on tradition, the work is a promising series launch.”

“Lindskold’s world of Artemis is instantly captivating.  The lovely cover art is eye catching, but it was Adara and the planet as a whole that kept this reviewer interested and excited.  Artemis is so brilliantly constructed that Adara’s world will blossom right before readers.  Sci-fi fans will definitely love the mixture of fantasy and alien life, and pure fantasy readers will enjoy the rich world of Artemis.”

“Lindskold does an excellent job of turning what could be stock characters (naïve city boy, wild huntress etc.) into real men and women.  It’s particularly refreshing that Adara and the other Artemesians are not, as Griffin initially assumes, “noble savages” – but intelligent, resourceful people with intellectual curiousity.”

“This is a terrific opening novel in which the author has done a brilliant job of weaving her complex and creative mythology into a well-constructed, fast-paced plot.  She also does a great job with her character development, particularly with Adara and Griffin.  Even the supporting characters are well-defined and multi-dimensional.”

Lindskold’s (“Firekeeper” books) new series launch offers an interesting look at a planet littered with advanced technology that was designed to appear to be a primitive paradise and that actually becomes one after the disappearance of the planet’s designers. Rediscovered civilizations is a great trope and Griffin an appealing fish out of water, but Adara and her psychically linked puma really steal the show. –Megan M. McArdle (Reviewed May 15, 2014) (Library Journal, vol 139, issue 9, p55)