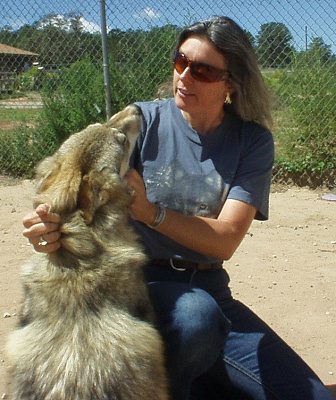 No. That’s not my wolf in the picture. I don’t “own” a wolf. I wouldn’t ever own a wolf, even if I didn’t live in a city. In the Firekeeper Saga, I’ve tried to show that wolves aren’t dogs, and dogs aren’t wolves. Dogs have owners. Wolves have packs—and unlike in fiction, their packs don’t include humans.

Not wanting a wolf for a pet doesn’t mean I don’t love wolves. I do love them, almost irrationally so. The sound of a wolf howling makes my blood thrill. Watching one move makes me wonder how some people can persist in viewing humanity as the peak achievement of creation.

The reason I don’t own a wolf is precisely because I love them.

So who is the charming young wolf in the new pictures on this website? He’s Dakota, one of the resident wolves at Wild Spirit Wolf Sanctuary here in New Mexico. See the size of him? In these pictures, he’s only about eighteen weeks old. Weeks. When he stood on his back legs, his paws ended up planted squarely on my chest. (I have the marks to prove it!).

We met Dakota when, over Labor Day 2006, my husband, Jim, and I went out to tour Wild Spirit Wolf Sanctuary with six of our friends. I learned about Wild Spirit—then called Candy Kitchen Wolf Rescue Ranch—several years ago, and am one of their wolf sponsors. So, I guess you can say that although that’s not my wolf, I’m one of their humans. 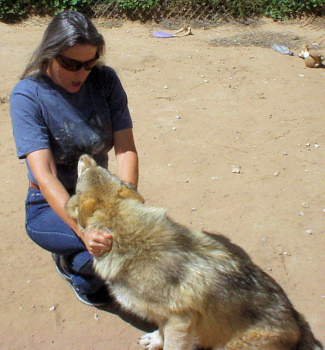 I’m not going to try and describe how beautiful the drive out to the area near the wolf sanctuary was. Unusually heavy rains had given the dormant seeds of desert sunflower a chance to blossom in full, covering acres upon acres with closely packed yellow flowers, these interrupted only by the occasional dark green of pinon and juniper, or a stand of orange globe mallow, or a splash of brilliant red Indian paintbrush, or the occasional stand of purple asters.

Against the stark background of red and golden sandstone mesas, the floral growth was a living yin-yang, a celebration of vegetative life against everlasting stone.

Oops. I tried to describe it. I failed. You need to see that expanse of color for yourself to know its glory, just as when you see wolves up close and personal you know they’re not dogs. 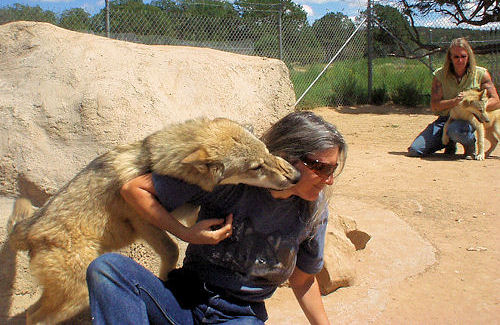 Wild Spirit Wolf Sanctuary provides homes for wolves and wolf-hybrids whose owners have learned the lesson that wolves aren’t dogs at a high emotional and financial cost to themselves—and often at the cost of illness or mutilation to their intended pets. The sanctuary charges only a small fee for a lengthy and very informative tour of their facility. If you want to experience wolves, I highly recommend making the trip.

You get to sing with the wolves, and watch them watching you. If one of the resident ambassadors is available, you might even get to visit a little more closely. On this most recent visit, our guide was a young woman named Angel. Angel told us stories about each individual resident of the facility, interspersing these with information about wolves in general.

We learned—and saw—how a wolf’s feet are different from a dog’s feet. We heard about the neophobia—or fear of the new—that often strikes wolves when they are two or three years old, and which is the reason why wolves frequently go from being adequate pets to dangerous ones. We learned about the texture of wolves’ coats and the power of their jaws. Best of all, over and over again we experienced first hand and up close the variety and beauty of wolves.

No. They are not my wolves—not Dakota, not Raven, not any of the wolves at the sanctuary—but I will admit to being happy to be one of their humans.

Photos in this section are Copyright © 2006 by Patricia Nagle. All rights reserved. 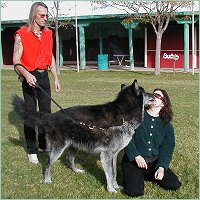 I’m one of the world’s most camera shy people, so when the time came to update my photos, my husband suggested enlisting the assistance of author and photographer, Yvonne Coats. Our first attempts weren’t quite disasters, but Yvonne suggested that when we did this again liquor might be needed — “for the photographer.”

I offered to buy the bottle; then I had a better idea. The best pictures of me seem to happen when I’m distracted — and what better distraction than to include a real wolf? I knew that Candy Kitchen Rescue Ranch* usually came to Albuquerque to attend Weems Artfest, so I got in touch. Leyton Cougar and Raven the wolf agreed to give us a chance to get some photos of me with Raven. 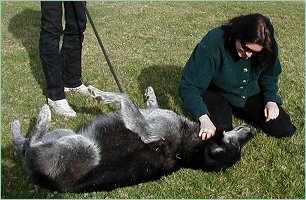 We met at the Albuquerque Fairgrounds and went off to an empty field. Leyton said the best thing to do was for me to sit on the ground and let Raven get as close as he cared to. Leyton would keep a hand on the other end of Raven’s leash, but otherwise he would not force Raven to do anything he didn’t want to do. Yvonne and I readily agreed. We knew we weren’t dealing with a dog here, but with a full-grown wolf. 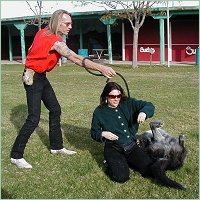 I got down on the somewhat damp ground, and Raven, curious as any healthy wolf is, came over to have a look. He decided I was interesting and started introductions by licking my face. (He probably liked the taste of my lip balm). Then he decided that he wanted to scent mark me and did this by rubbing himself all over me, including a roll in the grass for good measure. 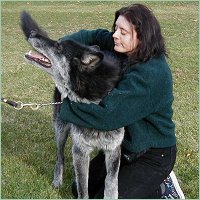 Oddly, even when Raven launched into me with sufficient force to leave marks on my rib cage through two layers of clothing, I wasn’t in the least afraid. Maybe it was because Raven was obviously having fun. Maybe because Leyton wasn’t worried. However, I suspect it was simply because I like wolves and Raven is an extraordinary example of his kind. 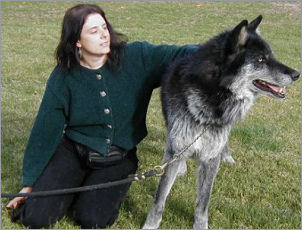 By the way, Raven, like all the wolves at Candy Kitchen, is a rescue animal. He was within days of being destroyed, because the county in which his owners lived does not allow wolves as pets. Luckily for Raven, Candy Kitchen was there. For more about Candy Kitchen, you can visit their website. 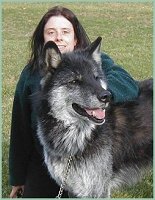 Photos in this section are Copyright © 2002 by Yvonne Coats. All rights reserved.