Home About Brother to Dragons, Companion to Owls

About Brother to Dragons, Companion to Owls

Brother to Dragons, Companion to Owls

Reissued by Tor Books in 2006.
Originally published by Avon Books in 1994. 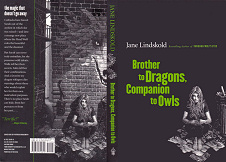 Sarah is insane. After all, she talks to walls, rubber dragons, and other inanimate objects. What no one else knows is that the inanimate answers her back. When budget cuts put Sarah out of a mental home and onto the streets, she is adopted by a street gang ruled by Head Wolf, a sometimes brutal man who may be as insane as she is. But someone wants Sarah — perhaps merely to put her back inside, perhaps for more sinister reasons. Championed by the hacker Abalone, assisted by other members of the Pack, Sarah goes into hiding, but hiding may not be enough to preserve her freedom — or her life.

Author’s Note: This was my first novel, and I am irrationally fond of it. The rubber dragon who is the original for Betwixt and Between sits on my desk. Sarah’s physical description came to me in a dream inspired by snow crocus beneath my office window. For some reason the book jacket reads Fantasy on the spine, but I see the novel as science fiction, set in a future not too far down the road.