Home Over Where Novels

Library of the Sapphire Wind 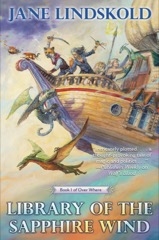 Instead of mentors, they got monsters . . .

That’s what Xerak, Vereez, and Grunwold think when three strange creatures shimmer into being within the circle of Hettua Shrine. Their conclusion is reasonable enough. After all, they’ve never seen humans before.

As for Margaret Blake, Peg Gallegos, and Tessa Brown—more usually known as Meg, Peg, and Teg—they’re equally astonished but, oddly enough, better prepared. Age and experience have accustomed them to surprises. A widely varied course of reading material has intellectually prepared them for the idea that other worlds, even worlds where people with traits more commonly ascribed to “animals” may exist.

Then there is the mysterious verse that Teg speaks as they arrive, words that seem to indicate that the Shrine must have been at least partially responding to the request made of it.

Despite doubts on all sides, the three unlikely mentors join forces with the three young “inquisitors” and venture out into the world Peg dubs “Over Where.” First they must find the Library of the Sapphire Wind, destroyed years before.

Will they find answers there, or is this only the first stage in their search? 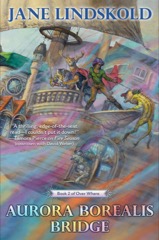 Can it get any stranger? Absolutely!

When Peg, Meg, and Teg were first summoned Over Where, vast and varied life experience (along with wide reading choices) helped them adjust to a world where they were the only humans, magic was real, ships could fly, and reincarnation was a confirmed fact.

In the company of the “inquisitors,” Xerak, Grunwold, and Vereez, the three newly appointed mentors rediscovered the Library of the Sapphire Wind, and, within it, revelations that transformed the young people’s pasts into a vast tangle of lies and half-truths.

But there are still questions to be answered. Before they are done, Meg the retired librarian, Teg the archeologist-turned-mage, and the multi-talented, ever surprising Peg will deal with kidnappings, betrayal, arcane artifacts, romantic intrigues, and the inescapable reality that past lives cast long shadows.

Together, the three mentors and their young allies will uncover the startling truth about what lies on the other side of the Aurora Borealis Bridge—a truth that holds the secret of Over Where, and that will change all their lives forever.